Trout tickling is the mystical art of rubbing a trout's underbelly until it goes into a lax, trance-like state. The fish is then scooped out of the water and thrown onto land. Similar to catfish noodling, the sport is lauded for its lack of equipment or tools of any kind, as used in traditional fishing. 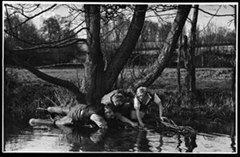 "The fish are watched working their way up the shallows and rapids. When they come to the shelter of a ledge or a rock it is their nature to slide under it and rest.

The poacher sees the edge of a fin or the moving tail, or maybe he sees neither; instinct, however, tells him a fish ought to be there, so he takes the water very slowly and carefully and stands up near the spot.

He then kneels on one knee and passes his hand, turned with fingers up, deftly under the rock until it comes in contact with the fish's tail. Then he begins tickling with his forefinger, gradually running his hand along the fish's belly further and further toward the head until it is under the gills. Then comes a quick grasp, a struggle, and the prize is wrenched out of his natural element, stunned with a blow on the head, and landed in the pocket of the poacher."

Just like that. Sounds simple enough (not). Some doubt the technique is real. Particularly in the video below. Fact or fake? Watch for yourself and decide.

Want to master Microsoft Excel and take your work-from-home job prospects to the next level? Jump-start your career with our Premium A-to-Z Microsoft Excel Training Bundle from the new Gadget Hacks Shop and get lifetime access to more than 40 hours of Basic to Advanced instruction on functions, formula, tools, and more.

Other worthwhile deals to check out:

Join the Next Reality AR Community

Get the latest in AR — delivered straight to your inbox.